[Update: I have closed my SVXY position and will hold JNUG for some time. The longterm analysis still applies here.]

On Tuesday I posted on StockTwits that I was going to be holding SVXY and JNUG through the night, and through the inflation announcement. Many traders thought I was a little crazy for doing that. However, I made 17% on JNUG that day and 12% on SVXY, and it was not a surprise to me!

So why did I know that high inflation numbers would be good for both SVXY and JNUG? Let’s dive in and I will tell you my thought process.

Most traders’ hypothesis was that the CPI would be greater then expected. Thats where we agreed. However, the analysis of what that would mean is where we differed. Any amount of “book reading'” would have led most traders to assume the following:

The biggest reason people thought I was a little loony was that I had also put a bet on JNUG.

JNUG is a complicated tool that I don’t have the time to describe right now, although I may take a crack at it in the future. What you need to know now is that JNUG tracks gold miners, and gold miners do well when the price of gold goes up (thanks Mr. Obvious). Inflation rates and the price of Gold are linked together very strongly. The reason for this is that as Inflation rises it pushes the value of $1 down. What that means, is that during inflation, “things” get more expensive if you are buying them with dollars. So if “things” are getting more expensive, traders look for “things” that are really easy to buy now, and then sell later when they have gotten more expensive. One “thing” they always find is gold.

Used gold is worth the same as unused gold, and if everything in the US costs more and more on a daily basis (which is exactly what inflation is, in its most simple form) then trading your dollars for gold when Inflation is spiking is a smart move.

Basically, a lot of people thought I was betting both sides of the race. They thought that by holding SVXY and JNUG overnight I was only going to benefit from 1 of the stocks. Well, the CPI came out and sure enough inflation had spiked more then was expected. So, IF I had been wrong, and other traders had been right, SVXY should have dropped off a cliff and JNUG should have gone up… 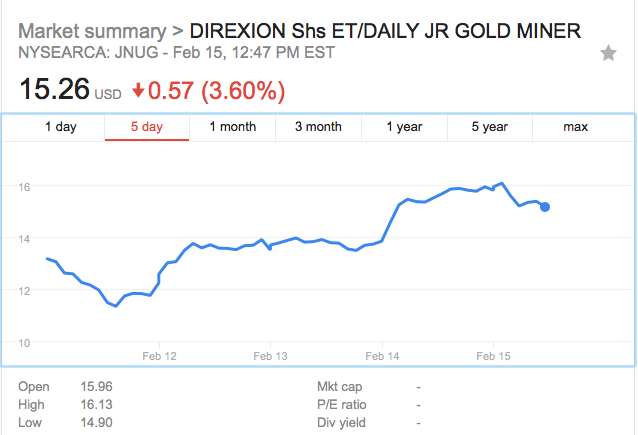 Looking at those 5 day charts, you will notice that both JNUG and SVXY popped immediately following the announcement. So what happened? Why did higher then anticipated inflation end up being good for gold, and good for the VIX?

It’s actually pretty simple. The Fed has always had 1 main job. Keep inflation in check. Deflation is easier to fix, so the Fed works really hard at keeping inflation low. Other economies suffer major swings up and down because they do not control inflation as well, and it is for the benefit of all Americans that they do this job very well.

However, the Fed has studied these things since the beginning of their existence. One thing they have learned over time is that the economy does its best when inflation is right around 2%. That means prices of all things, including labor, are rising by about 2% per year.

When the CPI numbers came out, and they were above average, it was initially a little bit of a shock. But as steady heads took over that day, they started to realize that inflation had not spiked to where the fed wanted it, it was still too low! Instead, the inflation rate had done exactly what we had been trying to get it to do for a couple years now, i.e. RISE!

It has been a stumper for a lot of economists as to how the inflation rate stayed so low after we spent 6 years printing money with no regard for the consequences, and after 9 years of GDP growth. But seeing the numbers finally coming up means the economy is starting to work the way they thought it did again, and that made them take a sigh of relief! THAT is why the VIX came down on the inflation announcement. Because the economy is finally starting to make sense again!

So with Gold at a relatively low cost per ounce, and our economy really heating up, it was pretty obvious that inflation was going to rise. Economists have been warning us since 2008 that printing money would lead to inflation. Every year, some economist somewhere warned people about the dangers of inflation, and over the last 10 years they have SEEMED to have been wrong. But they weren’t. Printing money causes inflation. Period. That is not subjective, it is an objective truth. If there is more money available, people will spend more money. It is a simple economic fact.

But year in and year out we have not seen inflation take hold! To me, that doesn’t mean we managed to escape the consequences of printing money. To me, that says that we have held back the surge of inflation akin to the way a cartoon cat might step on a hose to stop the water from coming out. It is building up and building up, and at some point it is going to explode. That is why I was so sure that inflation would rise, and therefore JNUG would have an excellent week.

I have since closed my position in JNUG after gaining a 30 percent profit in 5 days (I started trading JNUG the Friday before the inflation announcement). I will definitely be purchasing JNUG again in the near future, once it feels like traders are starting to digest the idea that inflation really is popping. But for now, with inflation still well below 2%, JNUG could still remain volatile.

However, I am still holding my SVXY. As long as traders continue to calm down about their doomsday ideas of high inflation and high interest rates, SVXY will continue to recover. But as soon as I start to see the early signs of inflation (like the price of a gallon of milk rising at the grocery store–seriously), I will move over from SVXY to JNUG.

Because even though I spent this article talking about how wrong other traders were this time, they’re general analyses were right. In a logical market, a rise in interest rates that was greater then expected would be BAD for SVXY and GOOD for JNUG. It was just this particular circumstance that led me to believe that a rise in inflation rates would be good for both.

You can subscribe to LIVE Stock Alerts ($9/month), 1 on 1 Chat ($6/month), and/or Early Access to my articles ($3/month) by emailing theblackinkeconomist@gmail.com to inquire!  I use the Remind platform to send alerts, which you don’t need anything other then a phone number to receive!

Disclaimer: Nothing I write should ever be taken as investment advice. This article contains my subjective opinions and you should do your own DD before you ever make a trade. If this article is the beginning of your DD then great! Keep researching!

Published by The Black Ink Economist

We offer trade alerts, analysis and education to traders of all levels View all posts by The Black Ink Economist